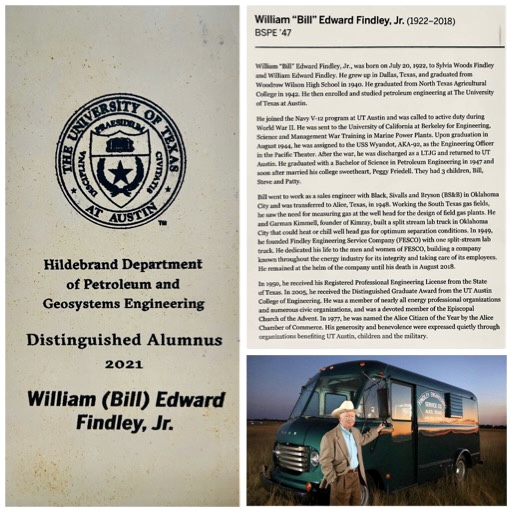 William “Bill” Edward Findley, Jr., was born on July 20, 1922, to Sylvia Woods Findley and William Edward Findley. He grew up in Dallas, Texas, and graduated from Woodrow Wilson High School in1940. He graduated from North Texas Agricultural College in 1942. He then enrolled and studied petroleum engineering at The University of Texas at Austin.

He joined the Navy V-12 program at UT Austin and was called to active duty during World War II. He was sent to the University of California at Berkeley for Engineering, Science and Management War Training in Marine Power Plants. Upon graduation in August 1944, he was assigned to the USS Wyandot, AKA-92, as the Engineer Officer in the Pacific Theater. After the war, he was discharged as a LTJG and returned to UT Austin. He graduated with a Bachelor of Science in Petroleum Engineering in 1947 and soon after married his college sweetheart, Peggy Friedell. They had 3 children, Bill, Steve and Patty.

Bill went to work as a sales engineer with Black, Sivalls and Bryson (BS&B) in Oklahoma City and was transferred to Alice, Texas, in 1948. Working the South Texas gas fields, he saw the need for measuring gas at the well head for the design of field gas plants. He and Garman Kimmell, founder of Kimray, built a split stream lab truck in Oklahoma City that could heat or chill well head gas for optimum separation conditions. In 1949, he founded Findley Engineering Service Company (FESCO) with one split-stream lab truck. He dedicated his life to the men and women of FESCO, building a company known throughout the energy industry for its integrity and taking care of its employees. He remained at the helm of the company until his death in August 2018.

In 1950, he received his Registered Professional Engineering License from the State of Texas.  In 2005, he received the Distinguished Graduate Award from the UT Austin College of Engineering. He was a member of nearly all energy professional organizations and numerous civic organizations, and was a devoted member of the Episcopal Church of the Advent. In 1977, he was named the Alice Citizen of the Year by the Alice Chamber of Commerce. His generosity and benevolence were expressed quietly through organizations benefiting UT Austin, children and the military.

Fast forward to 2022, FESCO has grown and excelled with 17 full service locations throughout the Permian Basin, Eagleford, and Haynesville. With over 700 employees, FESCO has become one of the best service company in the oil and gas industry for the past 7 decades.